The study of biblical Eschatology brings to the heart of the saved the hope that one day we will be forever with the Lord Jesus Christ.

5 – For many will come in my name, claiming, ‘I am the Messiah,’ and will deceive many.

11 – and many false prophets will appear and deceive many people.

12 – Because of the increase of wickedness, the love of most will grow cold,

13 – but the one who stands firm to the end will be saved.

I Tess. 1. 10 – and to wait for his Son from heaven, whom he raised from the dead—Jesus, who rescues us from the coming wrath.

To explain the real meaning of Biblical Eschatology.

In this quarter we will have the unique opportunity to study the end times. In this first lesson we will examine biblical eschatology. For those saved in Jesus Christ this is a topic that brings hope, because there is nothing better than to be sure that the Savior will return and we will live with Him for all eternity. However, for unbelievers, the second coming of Jesus does not offer reasons for rejoicing. The biblical predictions for the future of the wicked are appalling: “The wicked go down to the realm of the dead, all the nations that forget God” (Ps 9:17). However, there is still time for repentance and conversion. Therefore, the Lord’s Church has the responsibility to proclaim Jesus, fulfilling the Great Commission (Matthew 28:19,20).

I – THE STUDY OF ESCHATOLOGY

II – THE CONCERN ABOUT THE END OF TIMES

There are different eschatological interpretations about the end. We cannot study all of them in a single lesson, but we will study some:

It is important to highlight that the pre-trib thought is more in line with the book of Revelation (Rev 4:1-2). To pre-tribulationists, believers will be kept from Tribulation. According to this thought the purpose of the Tribulation is not to prepare the Church to be with Christ, but to prepare Israel for the restoration of God’s plan.

Most first-century Christians were pre-millennial. According to Pastor Claudionor de Andrade “this position was hard fought by Origen that, influenced by Greek philosophy, began to teach that the Millennium was nothing more than an allegorical reference to the action of the Gospel in the life of the nations”.

We advocate the futuristic interpretation, which turns out to be the one that best fits the good sacred hermeneutics, according to which the Bible is interpreted to itself.

In eschatological books, we can identify some prophecies that have already been fulfilled and we also understand that there are symbolic language in them. But, concerning the end times, in the face of the return of Jesus, we believe that this will take place before the Great Tribulation. 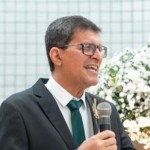